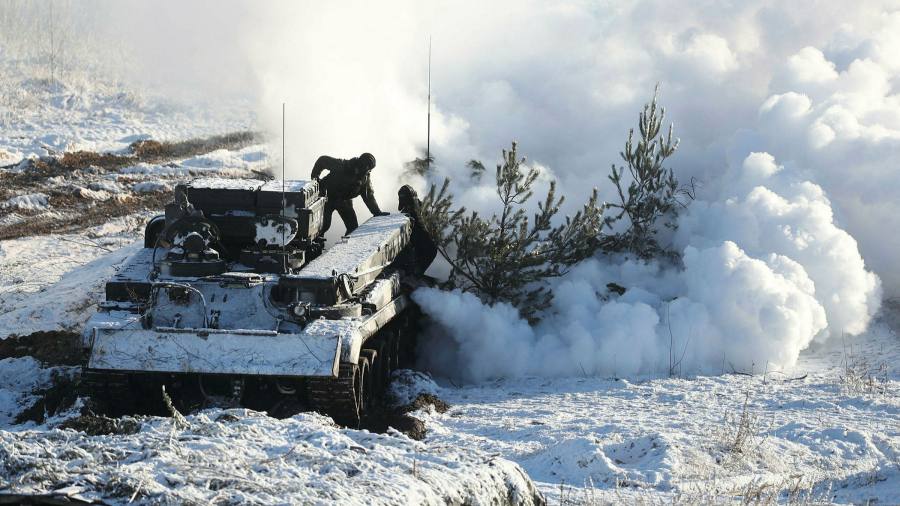 Belarus’ authoritarian leader Alexander Lukashenko has allowed Russia to use his country’s territory to invade Ukraine, and changed its constitution so that it can host Russian nuclear missiles.

But there is one bridge it has so far refused to cross: sending Belarusian troops to join the Russian attack on their common neighbor. “We’re not going to get involved,” Lukashenko told a gathering of security officials this week. “There’s no need for it.”

as of now Russia’s Invasion Stall In the face of fierce Ukrainian resistance, officials in Kyiv have warned that Lukashenko – who survived massive anti-regime protests in 2020 thanks to Kremlin support – may not be able to keep his troops on edge forever can.

Ukraine recently accused Russia of a “false flag” attack on Belarus for engaging in the war. Last weekend, Ukraine’s national security chief Oleksey Danilov claimed that Russia was trying to persuade Belarusian troops to enter Ukrainian territory disguised as Russians. “They want to put Belarusian soldiers in the uniform of the Russian Federation,” he said.

Belarus dismissed the false flag claims as “nonsense”, and opinion polls show Belarusians strongly oppose their soldiers taking part in the war. A senior US defense official said there was no indication that Belarus was putting troops into Ukraine or preparing to do so.

But as the war enters its fourth week, Russia’s need for reinforcements is becoming clear. US officials have estimated that around 6,000 Russians have been killed in the conflict so far.

Russia has not given figures since March 2, when it said it had suffered 498 casualties. But in a tacit acknowledgment of his military problems, President Vladimir Putin last week approved 16,000 “volunteers” from the Middle East to join the Russian cause.

For his nearly three decades in power, the former collective farm owner sought to maintain some degree of autonomy from Moscow by cultivating ties with the European Union.

But that strategy collapsed in 2020, when Lukashenko launched a brutal crackdown in protest of his claim to win a sixth consecutive term as president.

The West responded with tough sanctions, which have hit key sectors of the Belarusian economy, and made Lukashenko more dependent than ever on Russian political and economic support.

Katia Glod, a Belarus expert at the Center for European Policy Analysis think-tank, said of the possibility of Belarusian troops joining the fighting: “It will all boil down to whether Putin decides he needs them.”

She continued: “Especially with Russian troops in the country, and under current sanctions. Lukashenko is so financially dependent on Russia that it has no room for maneuver.”

Belarus’s army, with only 45,000 personnel, is smaller than that of Russia and Ukraine, and has less combat experience. But given the heavy losses Russia inflicted, the deployment of Belarusian forces could be useful to the Kremlin, said François Hesberg, a French defense analyst.

“The Russians need the bodies. They already have a few thousand Chechens and now they’re talking about flying in Syrians,” he said. Manpower is required and this is what the Russians currently do not have. So the notion of filling with Belarusians. , , A lot would really make sense.”

Others are skeptical about Belarus’ military capabilities, and how motivated its troops will be to fight the Ukrainians.

“It certainly won’t be conclusive,” said Mark Cansian, a former US Marine Corps colonel now at the Center for Strategic and International Studies think-tank in Washington. “It may be the only way . . . would be really important if they were willing to open another front to the west.”

Yet it would be a “highly risky” strategy for Belarus, which would have to rely on its inexperienced troops. “But it will be [also] To be a problem for the Ukrainians, in the sense that it would be another thrust they would have to defend,” he said.

Michal Baranowski, Senior Fellow of the German Marshal Fund in Warsaw, said it would be “very important” if Belarusian forces join the war and be able to close Ukraine’s western border, as it is the main source of arms supplies from Ukraine. was the way. Associate.

But he said closing such a long border would be a huge undertaking and “very unlikely at the moment”.

“The biggest question is not how much public support [for Belarusian involvement]But how much space does Lukashenko have for Putin to maneuver, and how much he is a complete puppet, ”he said. “If it is, that would be the scenario where we can see the Belarusian army as part of the Russian army.”