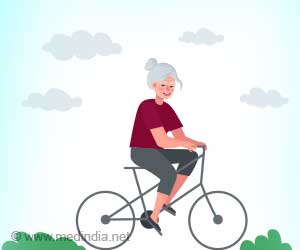 “The good news is that people who are at the highest genetic risk are likely to have a lower risk of dementia from living the same healthy lifestyle.”

The study looked at 8,823 people of European descent and 2,738 people of African descent who were followed for 30 years. The average age of the people at the start of the study was 54 years.

Researchers calculated genetic risk scores at the start of the study using genome-wide data from Alzheimer’s disease, which has been used to study the genetic risk of dementia.

Participants of European ancestry were divided into five groups and those of African ancestry into three groups based on genetic risk scores. The group at highest genetic risk included those who had at least one copy of the APOE gene variant associated with Alzheimer’s disease, APOE E4.

For each one-point increase in the lifestyle factor score, there was a 9% lower risk of developing dementia.

In people of European ancestry, the intermediate and high ranges were associated with a 30% and 43% lower risk for dementia, respectively, compared with a low range of lifestyle factor scores.

Among people of African descent, the intermediate and upper categories were associated with a 6% and 17% lower risk for dementia, respectively.

Among people of African descent, the researchers found a similar pattern of reduced dementia risk in all three groups with higher scores on lifestyle factors. But the researchers said the small number of participants in this group limited the findings, so more research is needed.

A limitation of the study was the small sample size among people of African ancestry and the many African American participants recruited from one location.